May 17, 2018 was informed that Cummins Engine (Shanghai) Trading Service Co., Ltd. (hereinafter referred to as "CPDC") was awarded "2017 Outstanding Contribution Award for Economy" by the People's Government of Pudong New Area. Subsequently, with its innovative business model, CPDC was awarded the "Innovation and Entrepreneurship" award by the China (Shanghai) Pilot Free Trade Zone Management Committee. Run out! 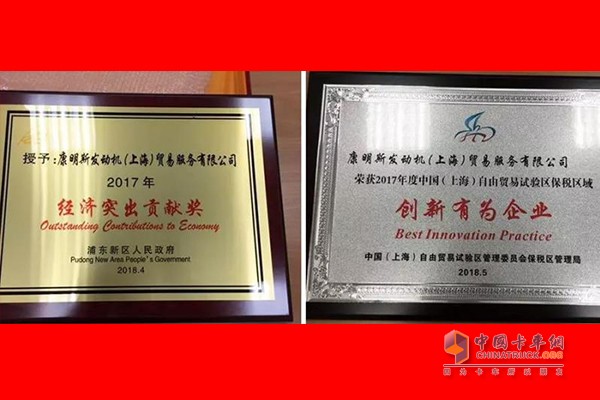 CPDC was established in 1999. In 2012, CPDC was upgraded to become the main distribution center of Cummins East Asia, and in 2013 it obtained the qualification of Asia-Pacific operator of Shanghai Free Trade Zone. With the strong support of the parent company and the government, the business began a full range of integration, transforming from a single import and domestic distribution into an integrated trade and logistics service company integrating import, export, bonded and domestic distribution.

In order to increase the availability of parts and better serve end customers, Cummins has established five regional distribution centers in Shenyang, Beijing, Chengdu, Xiâ€™an and Wuhan across the country, which has greatly accelerated the response to domestic customers. Greatly improve customer service efficiency.

In terms of international integration, it replaced the global distribution function of domestic parts of Singapore's main distribution center, and at the same time expanded the export of Cummins parts in Asia and Europe and achieved significant growth. The company's sales increased from 890 million yuan in 2013 to 1.55 billion yuan in 2017, with a compound sales growth rate of 16% and a compound annual growth rate of tax contribution exceeding 17%.

While the performance continues to create new highs, CPDC has become an important part of the entire Cummins supply chain and plays a key role in the stable operation of the entire company in China.

In the future, as the headquarters of the regional operations center, CPDC will also use valuable experience and excellent teams in the distribution industry to optimize the supply chain network of the Group; enhance the efficiency of the supply chain and create greater value for customers. Always for customers: achieve excellence and win in the future.

One of auto technology development characteristics is more and more parts adopt the electronic control. Sensors are usually composed of sensitive element, transformation components and measuring circuit. According to the function of the Sensor, it can be classified as measuring position, temperature and pressure speed and so on. Each of them performs their own duties. Once a sensor failure, the corresponding device will not work properly even doesn`t work. Therefore, the role of the sensors in the car is very important. At present, there are nearly one hundred sensors installed in the ordinary family car, and about 200 sensors in the luxury car.